Antiquity: The oldest known examples of mosaics are pebble floors found in the Anatolian region of Turkey dating from circa 700 B.C.

In the sixth century B.C. in Pella (the capital of ancient Macedonia), colored stones were set into flooring for shading to give depth to figures. Later, in the second century B.C., in the city of Pergamum, we find mosaics made of cut stones that strongly resemble the ones used in modern mosaics.

Excavations in areas of Mesopotamia (Ur, Uruk), Greece and Rome have brought to light other mosaics of these remote times as well as the names of some of the mosaic artists of antiquity, such as Hephaestus, who designed the mosaics at the Palace of King Eumenes using fragments of glass combined with stone, and Sosos of Pergamum, whose work survives only in a Roman copy.

From the first century B.C. the technique of mosaic hit full stride, but continued to be used only in flooring. Marcus Vitruvius and Pliny the Elder described the techniques in detail.

Middle-Ages: With the arrival of Christianity, mosaics began to be used to embellish walls and cover the vaults and domes of churches. The art of mosaic also translated to Middle Eastern mosques – most notably those of Mecca, Medina and Damascus – which showcase marvellous decorations.

The Renaissance: The mosaic took fifteenth-century Europe by storm, especially Italy and Florence under the Medicis. Ghirlandaio’s Annunciation is an impressive example. The subsequent decoration of St. Peter’s Basilica in Rome also furthered the revival of this technique.

The art of mosaic in Catalonia: Catalonia also has an ancient tradition of mosaics. The mosaics preserved in Empuries are a good illustration. During the first and second centuries B.C. they followed the Roman style, using black and white stones to form geometric designs such as the floors in Barcelona, Caldes de Montbui and Badalona.

Numerous mosaics, such as the Poseidon in Sabadell, date from the era of Roman occupation. At the beginning of the third century B.C., mosaics began to be polychromatic; the chariot race mosaics of Bell-Lloc and the mausoleum at Centcelles are two examples of this type.

Throughout Catalan history, examples of mosaics can be found in every period, such as the floors of Early Christian churches in Terrassa and the tomb mosaics of Barcelona, Sant Cugat del Vallès, Terrassa and Tarragona.

Later, in the twelfth century, we find Romanesque decorative elements in the notable examples of Sant Miquel de Cuixà and Santa Maria de Ripoll. The mosaic tradition was maintained, and at the end of the nineteenth century Art Nouveau became its major outlet. The elaborate decorativism so characteristic of this period significantly aided the development of all the decorative arts, and mosaics in particular.

It is well-known that often a building is characterized as Art Nouveau more because of its decorative aspects than because of its structural aspects. This decorative emphasis lent the art of mosaic such an extraordinary relevance and richness that it became one of the most frequently used decorative elements.
The presence of decorative elements such as flooring, stained glass, plasterwork, sculpted stone, wrought ironwork, ceramic inlay and mosaics is a key determinant of Art Nouveau buildings.

The role of the artists:

The sketchers and decorators, therefore, have a very important role (along with the architects themselves) in the ornamental design process. This role has been historically undervalued, but more is discovered every day about the worth and the very important role that these artists played thanks to the work of numerous researchers specializing in this field. We refer to figures such as Lluís Brú, Mario Maragliano and Eliseu Querol.
Classical elements, especially along Roman lines, reappear in the mosaics of the Art Nouveau period, thus the experiments with sketches and newly-created colors within the aesthetic bounds of the Art Nouveau movement that contributed so much to the revival of the exterior decoration (Batlló House, Palau de la Música, Comalat House, etc.) and most importantly interior decoration of buildings (Institut Pere Mata, Hospital de Sant Pau, Palau Güell and innumerable examples in Barcelona’s L’Eixample well-known for their delicate floor mosaics).

Roman mosaics: created with especially hard materials such as marble that would be appropriate for flooring. Mosaics were made by applying tiny fragments (tesserae) of marble in various colors to create images of great decorative value.

During Art Nouveau, in addition to marble, pottery clay was used which, thanks to its strength, made it possible to incorporate a diversity of colors into images.

Ceramic mosaics: made with ceramic pieces of uniform size. They were used for covering walls, ceilings and columns since they were not as durable as the marble and clay normally used for floors. This was the most frequent type of mosaic used during Art Nouveau.

Venetian mosaics: a beautiful method using tesserae of colored glass that originated in the famous glass factories of Venice, Murano and other cities. As it was a very expensive and less durable material, and furthermore fired, it was traditionally used for smaller mosaics or vertical surfaces only. It was used in Catalonia more frequently during Noucentisme than during the Art Nouveau period.

Trencadís differed from the above varieties of mosaic since it required a relatively new technique of laying fragments that was not used until the Art Nouveau period. It was advocated as a decorative technique by Gaudí and his disciples, Jujol in particular.

For trencadís, the irregular-sized tesserae were ceramic or made of other easily fragmented materials. This irregularity allowed for the creation of magnificent works of art using merely broken painted tiles (hence the name, from the Catalan trencat, broken) that otherwise would have no practical use.
Trencadís was usually applied to exterior vertical surfaces; because of its polychromatic nature, especially when lustrous metallic tiles were incorporated, decorative effects of great variety and richness resulted. In what was known as the direct application method, tesserae were placed face up directly into wet mortar, normally without any pre-planned design. The resulting unevenness produced unique reflective qualities.
Trencadís had the distinct advantage of quick application and the potential for very spontaneous design.

This method, used in Catalonia during Art Nouveau and afterwards, cannot be omitted from a discussion of mosaics. Hydraulic mosaics were employed mainly in interior flooring and consisted of embedding tiles face-up into hydraulic cement mortar, resulting in a smooth finish normally with geometric designs.

Indirect method: First, tesserae were glued face-down onto a full-scale sketch of the intended design. The paper, then, covered the mosaic such that the front was no longer visible. This operation was normally conducted in a workshop, and once completed it was put into its final place by sticking it into mortar. When the mortar dried, the paper was removed using a sponge and water, exposing the front of the tesserae on a smooth, even surface.

Direct method: The tesserae were placed face up directly into wet mortar, usually without a predetermined design. The final result is therefore not as perfect as with the indirect method, but the unevenness and changing surface levels give the final product light-reflecting qualities.

Trencadís: This form can be achieved in several ways, as recent studies by the specialists at the Can Tinturé Museum in Esplugues de Llobregat, particularly scholar Marta Saliné, have shown:

1) At random: as Gaudí said, “They must be placed in handfuls, otherwise you’ll never finish.”

2) With the creation of new forms taken from the designs on irregular tesserae.

3) With original designs that have been broken or fragmented.

4) With fragments sorted by similarities in color or shading.

5) With details taken from intact tiles.

6) With fragments of the same motif that elaborate on the original design. 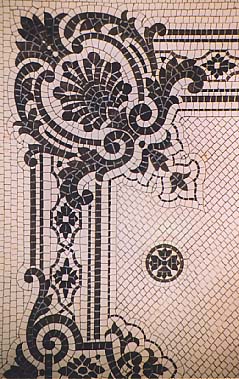 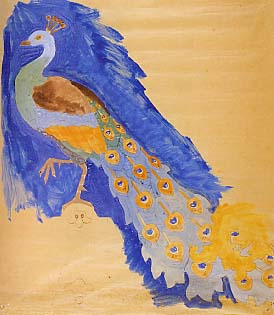 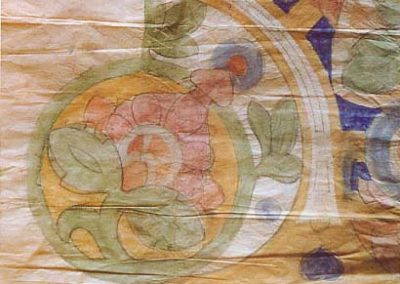 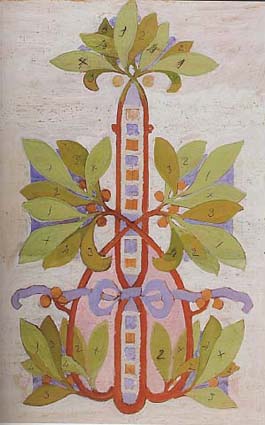 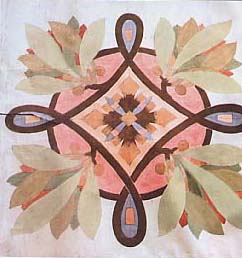 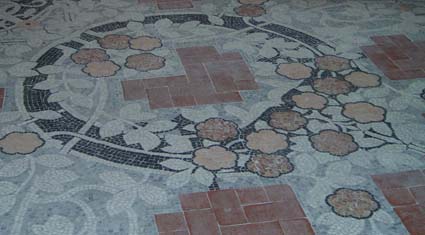 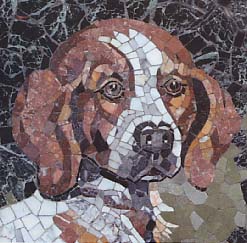 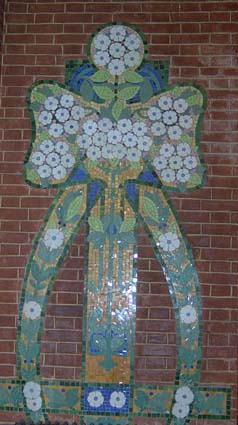 Various examples of trencadís into the Gaudi’s Park Güell: Ceiling rosette on hypostyle colonnade roof and other ceramic details. 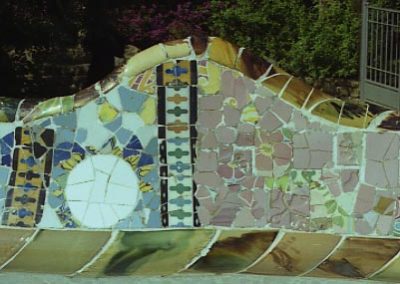 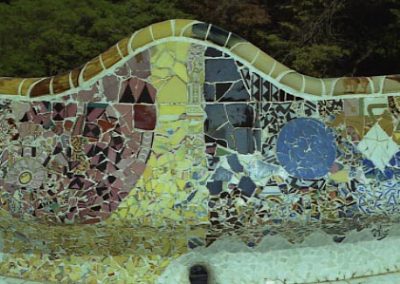 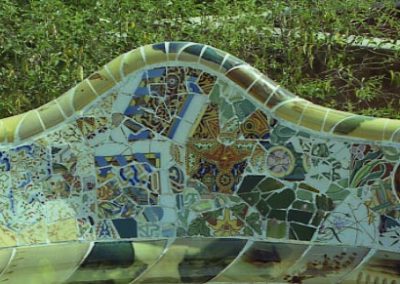 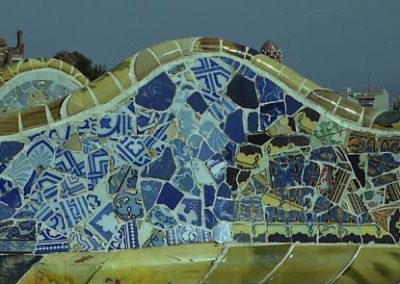 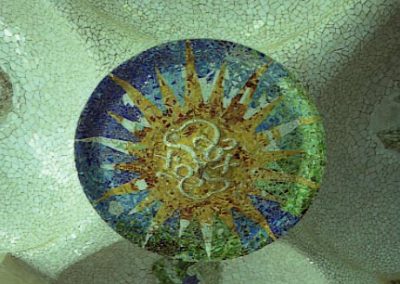 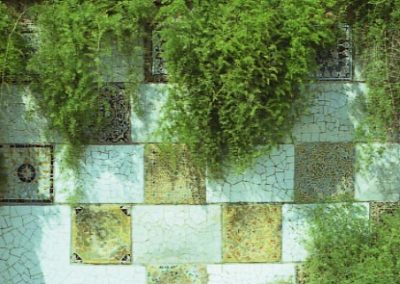 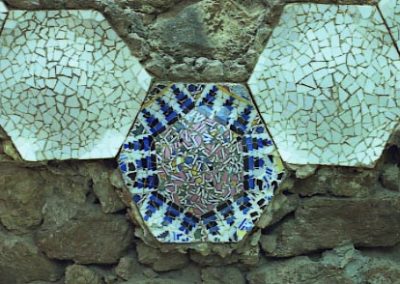 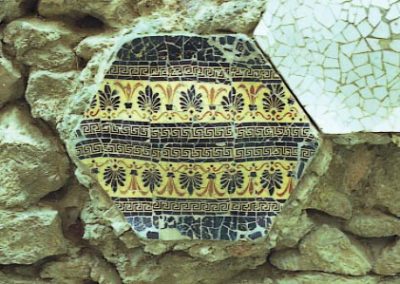