The Nativity façade is the unique part of the temple directly built by Gaudí.

When Gaudí died in 1926 only the tower of San Barnabas was totally finished and the other three very much advanced. This façade has been recently declared WORLD HERITAGE by the UNESCO.

It is formed as the other façades by four bell towers of square plant in its base, that comes to be a cylindrical structure when arrived at one fourth of their height. Further up, they come to a parabolic profile to become a pinnacle that crown each one of the towers.

The three spaces remaining among the edges, are take up by three entries forming the portico. 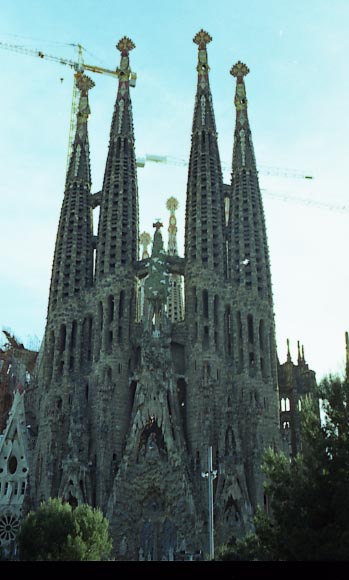 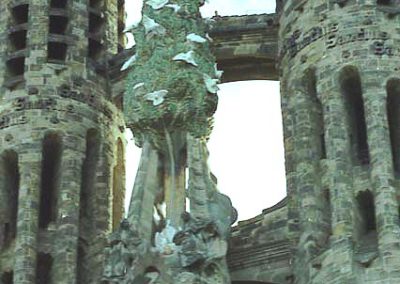 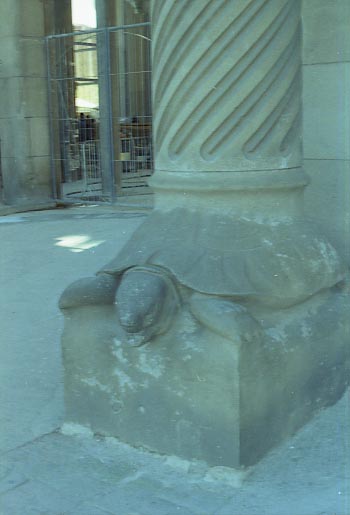 With a height of 107 meters the two inside and of 98 meters the outsides. This is one of the most characteristic and main elements of the façade. Totally accessible through spiral stairs leaving an important central empty space and catching up to the top. All the length of the bell towers is opened through a sort of stone blinds allowing the tubular bells sound diffusion planed by Gaudí.

The silhouette of the upper part resembles a Bishop’s staff. Other symbols to see, are the knot symbol of the bishop’s ring and in the culmination a golden cross showing the capital letters of the apostle to whom the tower is dedicated.

Each one of the towers of this and of the other two facades, twelve on the whole, four for each one, is dedicated to an apostle. Those of the Nativity façade, are dedicated to Saint Barnabas, Saint Simon, Saint Judas Thaddeus and Saint Mathew. Each one of them is represented in a great seated statue, placed in the point in which the towers pass from a square structure to another circular one, what permits to do, in the triangular spaces resultant, balconies serving them as base.

For the pinnacles, Gaudí imagined between 1914 and 1922 different solutions. In the last one finally adopted, the pinnacles are culminate with stars doing as a crown and by underneath, six signs with the mention “Hosanna” and “Excelsis”. 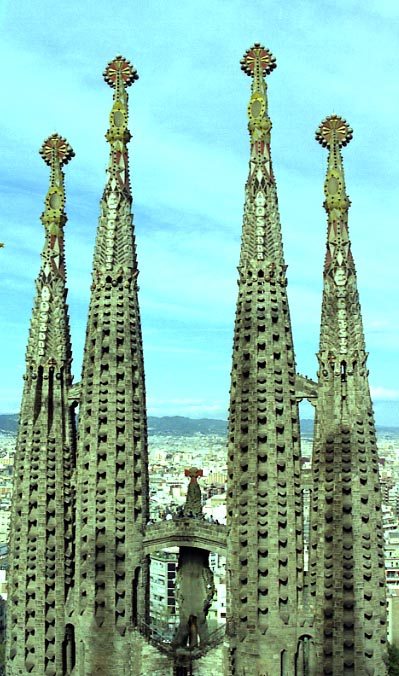 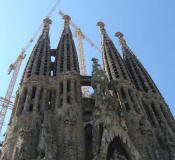 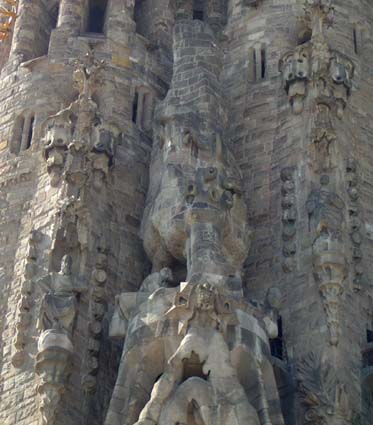 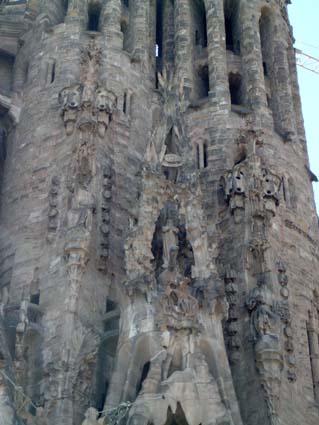 Gaudí designed for this portico an impressive iconography in which besides the religious figures, enormous quantities of vegetable elements have been carved making a link among the different religious motives in a imaginative explosion of life.

The portico is composed by three entries devoted to the three Christian virtues: the Faith (to the right), the Hope (to the left) and the Charity (in the centre) with a fantastic representation of the life of Jesus.

The archivolt of each entry continues up forming a flashlight finishing in a pinnacle. 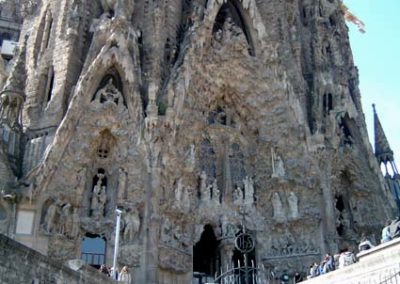 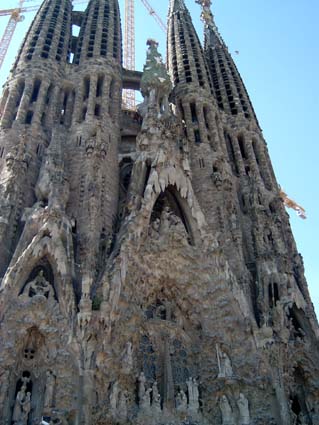 The Charity hallway, that is the central one, is divided into two different entrances by a column that supports statues of Jesus, Mary, Joseph and angels, completed to both sides by sculptural groups representing the adoration of the kings and the shepherds.

In front of the large window of the two ogives composed tympanum and a rose window we see the star of Bethlehem and on some pedestals the image of the Archangel doing the Annunciation to the Virgin.

Further up, we find musicians angels figures, all it surrounded by a vegetable world with flowers of several species and animal and birds, covering all the surface of the portico and giving it an impressive aspect unity for a so large surface. In the upper part of this ensemble, a representation of the signs of the Zodiac is found just as they were found the night of the birth of Jesus.

Further up and in a cave surrounded by birds, we find the images of the coronation of the Virgin. Further up, other images culminating in a sort of pinnacle constituted by a cypress with pigeons symbol of the purity and that among others decorative symbols raises itself between the two central towers and far above the base of the tympanum. 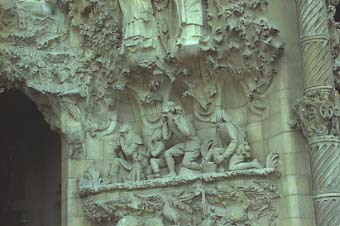 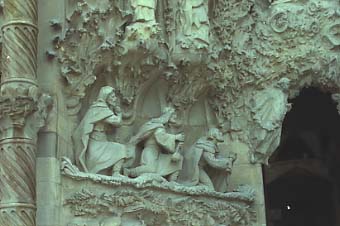 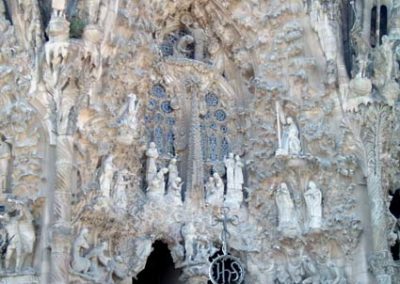 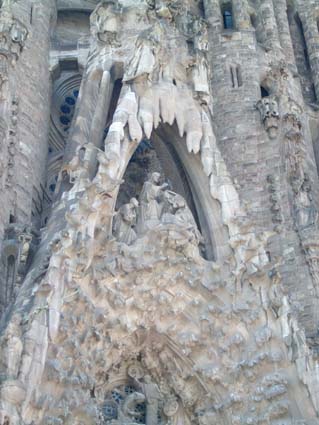 The Hope hallway, is the situated to the left, is a lot more small than the central one and exceed him something less on the façade, it has a single door. Contains also an exuberant vegetation in this case aquatic, because in this scenes the Egypt escape is represented and also the sacrifice of the “Sants Innocents” (Fool saints). At the base of the pedestals, it is aquatic fauna and gooses.

The entry is presided by a statue of Saint Joseph with the child Jesus standing. Also images of Saint Joachim and Holy Ana. The flashlight culminates in a pinnacle that represents the mountains of Montserrat and on top the group of the marriage of the Virgin and Saint Joseph. In the top end, an imperial crown on a polyhedral star. 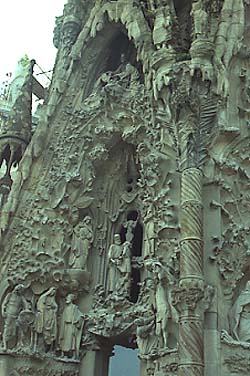 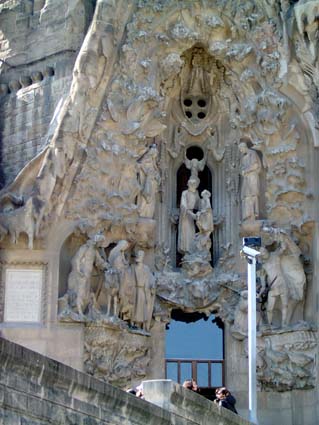 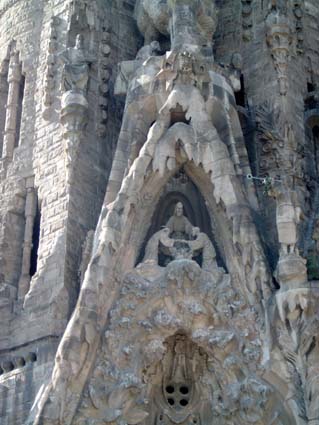 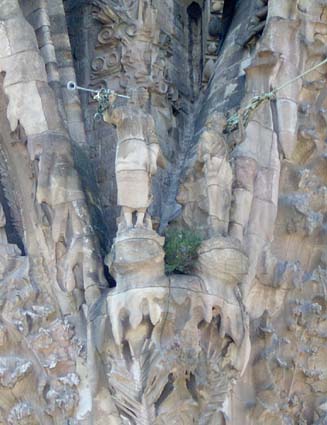 The Faith hallway, located to the right of the central one, it is of similar dimensions to the one of Hope. With a single door, we find in it pedestals with domestic birds and vegetables and a frieze of arabesque.

On top and to the right side, an image of Jesus working in a bank of carpenter and Joseph and Mary seeking Jesus in the temple. To the left, the Visitation of the Virgin to his Holy cousin Isabel and further up Zachariah, Saint John Baptist father. Further up in a niche, an image of this saint. Over the lintel of the door and presiding the entry, an image of Jesus seated at the age of twelve.

The tympanum has a large ogive and a rose window. The archivolt is decorated with an exuberant vegetation with branches of apple tree, to the left some angels playing clarions among others decorative elements.

The flashlight seemed to the central one is concluded by a pinnacle in whose interior there is an image of the Immaculate Conception and on top the group of the Presentation of Jesus in the temple, composed by the images of Joseph and Mary prostrated and Simeon with the child Jesus. 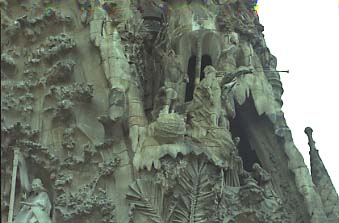 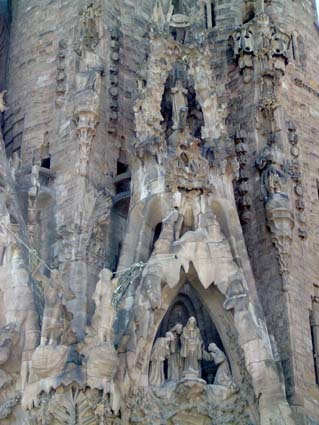 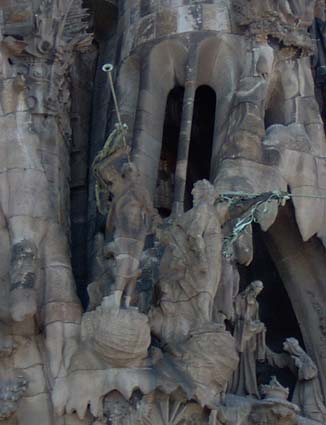 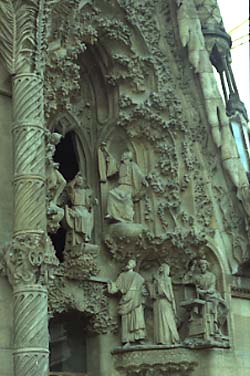 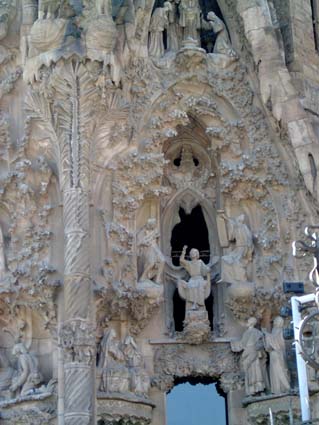 The artists sculptors collaborating with Gaudí in the decoration of this facade were Llorenç Matamala i Piñol, Carles Mani i Roig and Jaume Busquets. Subsequently other artists as Joaquim Ros i Bofarull intervened.

Sculptures by Llorenç Matamala i Piñol:
– composition and direction of Gaudí -:
Angels playing clarions
Jesus working
Jesus preaching in the temple
Saint Joseph and the child Jesus
Saint Anna
Saint Joachim
The slaughter of the Innocents
The flight from Egypt (with touches of Carles Mani)
Saint Zachariah
Saint John preaching
Figures of the Entry of the Rosary
– outlines of Gaudí, execution of Llorenç Matamala -:
The Virgin
– model and execution of Llorenç Matamala -:
The apostles of the bell towers
The wedding of Joseph and Mary
The coronation of Mary
Saint Joseph governing the Church (presented as a boat)
Presentation of Jesus in the temple

Sculptures by Jaume Busquets:
Central Group with Jesus and Mary
The Annunciation of the Angel to Mary

Are you a fan of Barça? Get free bets for Futbol Club Barcelona at RedeemBonusCode.co.uk. Redeem the William Hill promo code at https://redeembonuscode.co.uk/william-hill-promo-codes/ and get 3 free bets!