The project of the Sagrada Família plan to build twelve bell towers (one for each apostle), four more for the forth evangelists, another one for the virgin Mary and the most important one of 170 meters high, crowned by the Gaudí typical four branches cross devoted to Jesus Christ. These bell towers of parabolic profile have in its interior spiral stairs surrounding a space where to install the tubular bells. Gaudí studied during years that bells that will sound by air compressed and percussion (these bells will be one of the last elements to be built).

Each window, column and element refers to saints, institutions or mysteries of the catholic faith.

At present more than 100 years since the start elapsed, the works follow at a fast pace. The only part of the temple built directly by Gaudí is the apse and the Nativity façade with its four bell towers. At the time of the Gaudí death in 1926 aged 74, knocked down by a tramway, only had been completed the base without the pinnacles of three of it and the totality of the one of Saint Barnabas.

The polemics on the works continuation from 1952, due to the lack of original designs destroyed during the civil war (1936-1939) has been fortunately totally surpassed.

If the works follow the same pace, the end of it could be reached in around 20-25 years.

The crypt is one of the parts of the temple designed by Francesc de Paula Villar in a neo gothic style.

Gaudí took advantage of it as base of the presbytery of his project, although it was one of the elements impeding to put the axis of the nave crossed to the block base of the temple. It has the same disposition that the apse built on it. It’s composed of seven chapels, an ambulatory and a central area, almost circular (40x30 meters) over which, the presbytery is found. It is supported by a whole of ten pillars from which small columns are projected towards a key of vault containing a representation of the Annunciation. This vault raises two meters the level of the presbytery.

To assure the lighting and the ventilation, there is a ditch around the crypt.

The access is done by two spiral staircases, one to each side of the apse. These stairs have to be prolonged up to permit the communication between the different levels of tribunals and choruses and to arrive to the roofs. At present an elevator has been installed by simplify the access.

The sculptor Carles Mani i Roig carried out the works of touch of the capitals and a reduced model of Christ for the Crypt.

In the crypt the burials are found of Josep Maria Bocabella – promoter of the temple -, his descendants and Gaudí.

This space has been recently declared WORLD HERITAGE by the UNESCO. 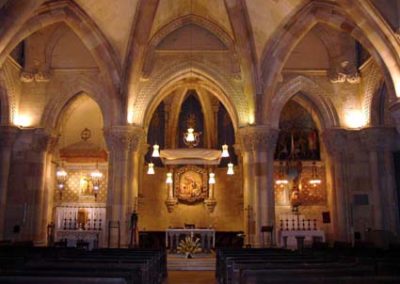 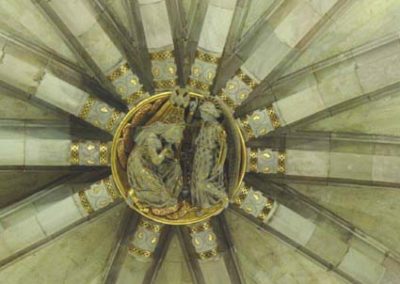 The apse exterior, as the crypt, was one of the first elements to be built and maintains the neo gothic character the architect Villar gave it and that Gaudí respected.
The exterior and particularly the seven chapels surrounding the presbytery is at present in construction process. Each one of these chapels will be illuminated by three large windows, the central one being highest than the other two, to allow to place an image without cover it.
The pillars of the chapel edges, are finished in prismatic pinnacles and at a medium height with gargoyles with figures of dragons, lizards, snakes, salamanders, frogs, etc. serving to rain water evacuation.
The chapels flashlights will be pyramids with inclined pilasters being a part of the clerestory crowning the apse. It will be culminated by invocations of the Advent antiphons.
To both extremes, the stairs rising from the crypt and follow to the upper levels, have four series of superimposed large windows and a clerestory ended by ears in the upper part. Here also the gargoyles with decoration of terrestrial and marine conches are a very naturalistic decorative element.
In each extreme a sacristy will be built. 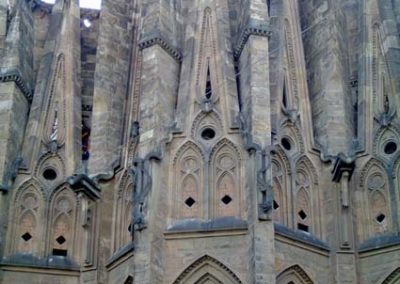 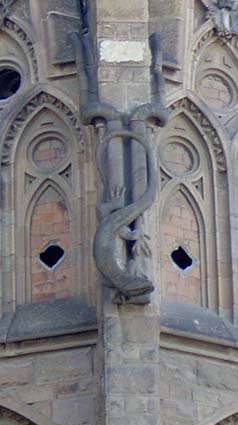 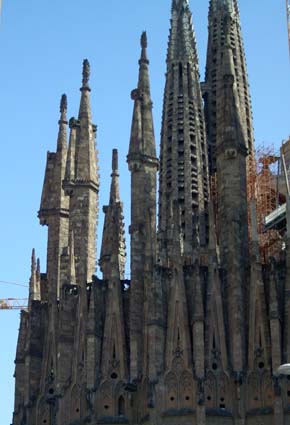 The Domes and the Obelisks

These constructions are at present just started and they it will be of the most spectacular of the temple. It are grouped basically over the transept in a number of six: the largest and higher one will be the central one devoted to Jesus, of hundred seventy meters of height and culminated by a 15 meters cross of four typical branches of Gaudí that will be covered with glazed Venetian that will shine under the sun and at night the arms will leave a powerful focus of light.
The second one of hundred forty meters of height and situated behind the previous one, over the apse, will be devoted to the Virgin Mary and will be culminated by a star.
Finally the last four situated around the main one, will be dedicated to the four evangelists Lucas, Mark, John and Mathew, they will be of a height of 130 meters and they will bind with the central dome by a series of bridges. They will be culminated by figures of angels.
The domes will have an eight-sided base and they will be built with brick.
The words Amen and Aleluya (Hallelujah) made in ceramic elements will travel through from top to bottom the domes.
The Obelisks will be situated one in each corner of the temple, they are like some gigantic milestones with representations of the four stations.

The cloisters of the Sagrada Família have a completely original disposition that does nothing to see with any another known construction of this type. Really, the cloister of the Sagrada Família, is not located at a side with respect to the church body, but it is arranged around the temple, in such a way to walk, to meditate and rest and at the same time serves to isolate the temple of the noise of the city that encircles it. According to Gaudí, they will be destined to pray the Rosary in procession.
The cloisters are situated at the same temple level and it cross the three porticos, being articulated with the interacted constructions, like the Assumption Chapel that interrupts them to start again its course symmetrically to the other side and the Sacristies, Baptistery and the Sacrament Chapel.
The cloister vaults are of edge generating pediments with three ogives rose windows.
Each cloister intersection with the facades it crosses has a door devoted to different dedications of the Virgin: those of the Nativity façade, to the Virgins of Montserrat and of the Rosary, those of the Passion façade to the Virgin of the Mercy and of the Pains.
The cloisters are finely decorated with various sculptural motives surrounded by representation of flowers, palms, olive branches, etc.
Being a construction surrounding all the temple, it is in different construction phases and therefore it is impossible to have a whole vision, but the built parts, mainly in the left side of the Glory façade and in both sides of the Nativity façade, allow to give a clear idea of their final appearance. 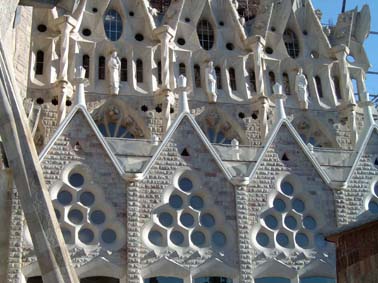 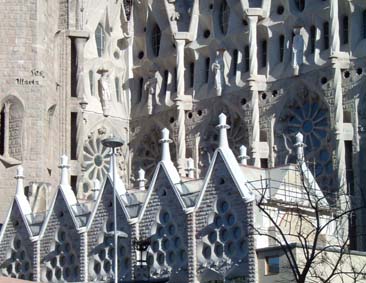 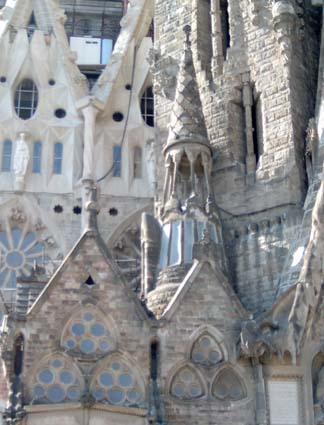 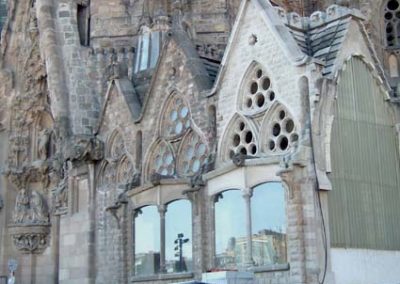 There will be two that are not yet begun, they will have a dimensions in the base of 18x18 meters and a height of 46 meters.
The roof will have a shape of dome of twelve faces and they will be situated in the angles of the cloister behind the transept.
The twelve faces of the dome will be hyperbolic paraboloid that at the level of the cloister roofs, they will be cut by eight vertical plans originating twelve uneven pediments, being the corner ones largest than the walls ones.
In the corner angles there will be a sort of tower culminated by three obelisks and a flashlight. In the opposed extreme, a stair will communicate the three base floors, of which, the main plant will have a height of 14,5 meters and will be partly arranged as a steeped gallery. The light will enter through the twelve pediment triangular rose windows.
The dome will have four levels and will be perforated by triangular windows, in order to assure a good lighting.
All the vaults system covering the different levels, will be done based on hyperbolic paraboloids and hiperboloids.
The domes of the two sacristies will be harmonically combined with the series of pediments, pinnacles and flashlights of the apse. 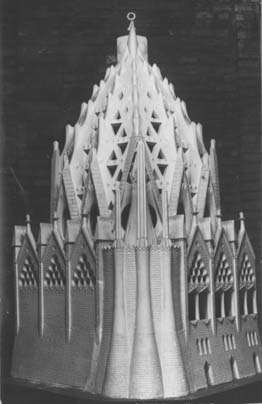 Gaudí was inspired for the design of this chapel, that is not yet begun, in which the sculptor Bonifàs of Valls carried out for the cathedral of Girona.
Located between two sections of the cloister in the northwest wing, ite will have a square plant. Behind two spiral staircases will be built. As the chapel will break the continuity of the cloister, a small vestibule will assure the connection. It will have two direct doors from the street.
An vault hyperboloid vault will cover the chapel. To eight meters of height, a round gallery will be arranged.
The chapel will be culminated by a dome of 30 meters height concluded by an imperial crown.

Just in front and to each side of the altar is located the transept of three naves, at present under construction. The transept carries us to each extreme to the two facades of the Nativity and of the Passion.
The three transept naves have a total width of 45 meters and their length is of 60 meters.
This area is still in a relatively late phase of construction. 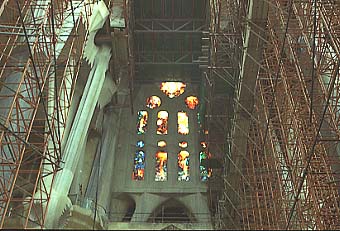 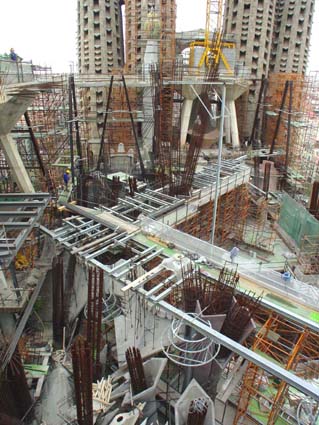 The Naves and the Choirs

Continuing the axis of the main altar the central body of the temple is unfolded with five naves that will finish in the Glory façade, main entrance of the temple, located in Mallorca street. The central nave has a width of 30 meters and each one of the lateral naves 7,5 meters, what does a total of 60 meters wide. The total length will be of 80 meters to the ambulatory of the apse. The height to the vault of the central dome will be of 65 meters.
The columns of the nave and of the apse are ramified to a specific height and they incline slightly to collect the interior vaults. Above the columns of the extremes, a tribunal with a stands is located along and around the apse, to lodge the choirs surrounding the presbytery.
The lateral naves are totally travelled in a height of three meters above the main plant, by steeped slope choirs having a capacity for more than thousand singers.
The naves are at present under very advanced construction and are covered. The part to the Glory façade is in closing process to assure, as quick as possible, the possibility to carry out activities into the temple. 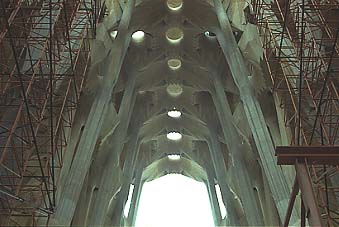 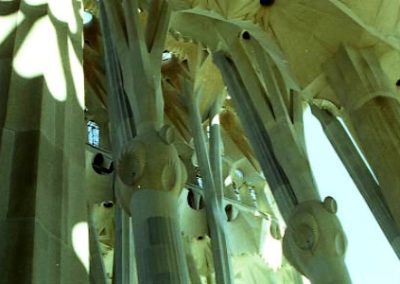 The Presbytery or Altar

The main altar is located on the crypt and is surrounded by the seven apse chapels devoted to the seven pains and joys of Saint Joseph. It is two meters over the general level of the temple.
The altar is designed in a very austere manner, with an unique table with crucifix on top. It would be covered by a great canopy surrounded by a lapidary hanging to a triumph arch of some twelve meters height. From the centre of the apse a great flashlight will hang and another one from the dome.
In this area, the construction is very backward, because it’s pending of the end of the apse and the transept.