Symphonic works:
Catalònia
Concert per a violoncel i
orquestra -1917
Minuet per a quartet de corda
-1889
Sonata per a violí i piano

Born in Barcelona the 22 May 1865.
From his childhood, he went with his fathers to Buenos Aires – Argentina -. The father, a musician, helped him in his first musical studies in that city and later – 1875 – in Córdoba also in Argentina. Before his return to Barcelona, the young Morera was commissioned by the Argentinean government to write some compositions as “Himno a la patria” and “Mayo”.

The year 1883 he comes back to Barcelona where he immediately know the most important musicians of Catalonia at that time as Isaac Albéniz and followed his musical studies with the masters Vidiella (piano) and Felip Pedrell (composition). Compositions as “Introducció a l’Atlàntida” – 1893 – where wrote in that period. Enric Morera conducting the Choral “Catalunya Nova”.

Lately, he lived for two years in Brussels where he perfection his musical knowledge’s with Paul Gilson and Philippe Févez, and later he went again to Argentina. Finally he returned definitely to Barcelona in the year 1890 starting a very active musical activity, being in a short period of time one of the most representative musicians of the Catalan musical Modernisme (Art Nouveau). An example of the music he wrote in that period is the opera “La fada” (The fairy) showed for the first time during the “Quarta Festa Modernista” (The forth Modernist – Art Nouveau – Festival) organized by Rusiñol in Sitges in the year 1987 specially devoted to the music. 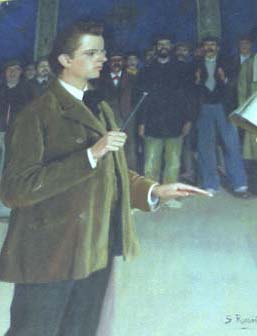 Before, in 1895, he founded the choral “Catalunya Nova”.
The activity and vitality of Morera is exceptional, he wrote more of 800 compositions: concerts, chorals, scenic music, symphonic works, operas, sardanes (national Catalan dances), etc., some of which are mentioned in his Works.

Morera was also the author of some books on musical theory as “Tractat pràctic d’harmonia” (Practical treaty on harmony). He also wrote a book on memories “Moments viscuts” published in the year 1936.
Morera died in Barcelona the 12 March of the year 1942.