The Glory façade, located in Mallorca street, is at this time just begun, there is only the naked skeleton of the columns arriving at a height of 10 meters besides other elements as the called Jube.

This facade is oriented at the south and will be dedicated to the Glory of Jesus.

Gaudí only left a structural study and the symbolic and graphic plan of this façade.

In Mallorca street the unevenness of the plant of the building with respect to the street is the most important one. To be able to give an adequate entrance to the temple, Gaudí designed a flight of steps over Mallorca street, in such a way that all the traffic will have to pass underneath, the stairs should reach the opposite block (among the streets Mallorca and Valencia and between Sardinia and Marine streets (but this presents a very important problem, because this block of houses is totally built and to finish the project and to give it the deserved dignity, the totality or a part of the block must be knocked down. We can imagine the problems that this would be able to cause).

The Glory façade is structured as the other two already built, with four bell towers grouped by pairs. 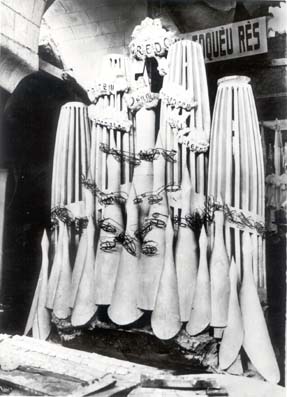 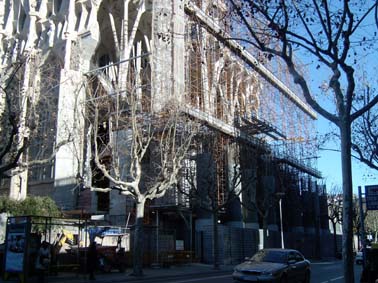 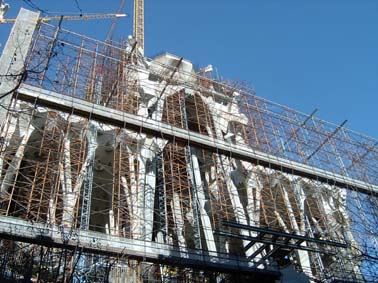 They will be, as it is with the facades of the Nativity and of the Passion, the more characteristic and main elements of the facade. Here but, the importance of the volumes that Gaudí reserve to the portico, will do that this portico will cover the towers a lot more than in the other facades.

They will be, as the other, totally accessible through spiral stairs that will leave an important central empty space that is where the tubular bells will be located.

Each one of the towers of this and of the other two facades, on the whole twelve, four for each one, is dedicated to an apostle. Those of the Glory façade, will be it to Saint Andrew, Saint Peter, Saint Paul and saint James the older.

Each one of them will be represented in a big statue, placed approximately to a height of a third of the total length of the towers. The pinnacles will be seemed to the ones of the other facades but with a different vertical ordering.

Will be covered by the four hyperboloid vaults under the bell towers and by an assembly of fifteen uneven flashlights, with a total of twenty vaults. It will rest on twenty-one columns.

The doors will be five, one for each lateral nave and a triple central one for the main nave that, like the other porticos, will be devoted to the Christian virtues, faith, hope and charity.

The most spectacular element of the assembly, will be some constructions shaped as clouds that will rise through the four bell towers following the flashlights and that will show writing in characters of enormous dimension the Creed “Credo in unum Deum Patrem Omnipotentem, creatorem coeli et terrae”. These clouds will surround an image of God.

Gaudí wanted that the assembly of this façade could to be seen from the sea.

The portico will present to a little height a frieze with images of the Purgatory and to different heights images of the life of the men and his works. The supernatural life would be expressed through saints surrounding the figure of the Redeemer. In the upper space there would be a representation of the Final Judgment.

Departing of the porticos the sign of the cross will be seen as the Sacred glorious Family with Jesus in the middle and over him, the Holy Spirit and God Father.

Each one of the doors, will be devoted to a sacrament and also to one of the petitions of the Paternoster.

Flight of steps platform, Baptistery and the Sacrament Chapel

The platform of the flight of steeps with the same width of the façade, will have a characteristic monument to each side. To the left and in front of the baptistery there will be an enormous spout that will launch four water spurts to the height of twenty meters, that will descend again by a system of cups and drainpipes. In the other side, and in front of the Chapel of the Sacrament, an enormous burner will project flames to the sky.

The Baptistery and the Chapel of the Sacrament will be two brother buildings one to each side of the Glory façade, seemed to the Sacristies (on the back of the temple), but higher. Also it will be three obelisks and the flashlights covering the small angular chapels of the cloister.

Both buildings will have an open door directly opened to the portico, another to the interior of the temple and a third to access the cloisters, that also will communicate directly with the portico.

The Denver Eye – learn about the architecture of Denver, Colorado.