Visits: The building is at present the seat of the “Museo de los caminos ” (Museum of the ways) and show an interesting collection of sculptures of Renaissance and baroque in polychrome wood and silverware and gold liturgical elements. The Museum occupies the four floors of the building.

The visit of the building exterior, interior, and its content is very interesting. The Gaudí building is an impressive architectonic work.

Price of the visit: 2.5 Euros. Special prices for groups and in case of temporary exhibitions. It is also possible to buy a ticket to visit both the palace and the nearest cathedral at the price of 4 Euros.
Timetables, prices and other information may change, it is advised to check beforehand.

Available guides: A diptych is hand in to the visitors. Also other texts on the building, Gaudí, the city and the region – that some are cited in the section Bibliography – can be acquired.

Handicapped accessibility: The steps of the entrance can be saved by means of a slope incline weak with railings to both sides. The ground floor does not have unevenness, but the building does not have an elevator and the access to other floors is make through a spiral staircase of ample dimensions and steps of little height, but that can seriously prevent or make difficult the visit of people with diminutions. Access to that other floors not possible for wheelchairs. 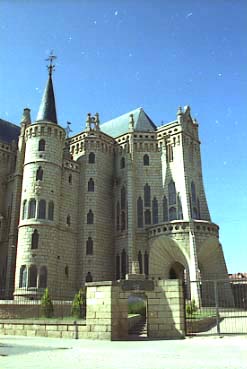 Astorga is a city very strategically located in the Way of Santiago. Episcopal city since a remote antiquity, the first known reference of an Episcopal palace refers to the Xth. century.

Later, we have some news on another Episcopal palace donated by the queen Doña Urraca to the bishop Don Pelayo within the walls of the city – year 1120 – in a place in which before a pagan temple was raised.

This building was being modified successively, until an important fire occurred the day 23 of December of 1886 destroyed it totally.

In that time the bishop of Astorga was the Catalan Joan Baptista Grau i Vallespinós – been born in Reus the year 1832 -. That bishop, connoisseur of the creative activity of Gaudí, ordered to him the construction of a new Episcopal palace, commission that Gaudí accepted in February of 1887. At that time Gaudí was working in the Palau Güell and the Crypt of the Sagrada Família (Holy family) of Barcelona.

The next month of March, the Ministry of Grace and Justice, who had to pay the work, accepted the appointment. Gaudí sent the signed drawings in June to the bishop who was pleasantly impressed by them. The 30 of September, the Conferencia Diocesana de Astorga (Astorga Diocesan Meeting) decided to send the drawings to the Ministry and the Ministry to the Royal Academy of Fine Arts of San Fernando that had to approve them. After various modifications that bothered to Gaudí, the definitive approval of the project was obtained the 29 February of 1889.

The work was auctioned in the month of April and it was adjudged to the sole bidder who was Policarpo Rodriguez by the amount of 168.520 pesetas (1.012 Euros) of the time.

The works began soon, the first stone being placed the 24 of June of 1889, day of Saint John and saint’s day of the bishop. The works began at a fast pace, and being already very advanced when the bishop Grau died the 21 of September of 1893.

The difficulties for Gaudí began here. The works were interrupted because the Conferencia Diocesana de Astorga didn’t understand the liturgical meaning of the work and simultaneously was the intention to reduce expenses. Gaudí – of strong character – did not accept any change in its projects and retired all the Catalan personnel – craftsmen and specialists – who had made to come from Barcelona. Also probably another fact had to influence in the Gaudí decision, the important delay in the collection of his architect fees on the part of the Ministry of Grace and Justice.

From the Gaudí resign, other architects were in charge of works who they were not able to make them progress substantially. These architects where: Francesc Blanch i Pons – January to July 1894 – resigned after half a year; Manuel Hernandez y Alvarez Reyero who was named the same year and held the position without making nothing significant. Later, the bishop Julian de Diego y Alcolea who understood better the work of Gaudí, traveled to Barcelona to request Gaudí to take newly the works responsibility, thing that the architect rejected.

The bishop Miranda who follow Diego y Alcolea in 1905 commissioned the direction to the architect Ricardo García Guereta who changed many of the ideas of Gaudí to draw the definitive drawings of completion – which they differ substantially from the project of Gaudí, much more bold and imaginative -. the works were very outposts in 1913 when the bishop Alcolea consecrated the chapel. Nevertheless, in 1914 García Guereta resigned the direction of works when lacked to finish details of the last floor and decorative elements.

The building remained in these conditions, without finishing absolutely, until in the year 1936 it became power station of the Falange Española in Astorga and shelter artillery personnel. The flaws originated by this use were not repaired until some years later.
Finally the building finished during the Sixties. 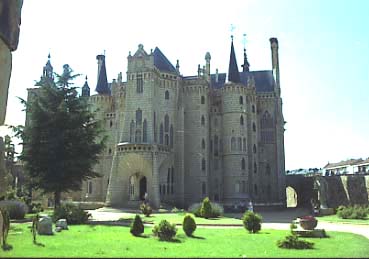 The palace has the aspect of a castle, mansion and temple with its impressive exterior constructed with granite stone of white color. Constructed in a neogothic style, it presents a series of elements with apparent military function like battlements, towers and others as viewpoints and terraces.

The building is oriented from southeast to the northeast and is surrounded by a moat and railings in stone and iron. The building body is flanked by four towers, one in each one of the angles – one of them of a greater diameter than the other three.

The building has four floors with an internal disposition in Greek cross form: the cellar (in mudéjar style), ground floor, main floor – where it is the impressive chapel (with a triple apse with windows, flying buttresses, gargoyles outside and the interior adorned with stained-glass windows, paintings and religious objects that reinforce the magnificence of the ensemble), the room of the throne, the office of the bishop, the dining room, all it organized around the central piece or lobby – and the last floor or attic. Outside, the porch with its three splayed arcs – that created serious problems during their construction, it were to be reconstructed three times – constitute one of the most spectacular architectonic elements of Gaudí.

In words of Cèsar Martinell, they are together with the inclined columns “the best advance of the stone architecture from the pointed time to the present time”. In the interior, the granite, the mosaic, the pillars and the columns are mixed in a spectacular way allowing, as Carlos Flowers said, an organization practices with a continuous and flowed space “like in which the diverse parts are followed one another and chaining without ruptures nor definitive divisions” besides to adapt with rigor to the symbolic spirit of the palace.

The illumination is another one of the remarkable aspects, specially in the main plant that is equipped with a majestic luminosity that simultaneously creates a gathered atmosphere. Lamentably, the last floor (attic) was not constructed according to the drawings of Gaudí, but with those of García Guereta in which these spaces lose brightness and originality aside with light. These changes did not affect solely the interior, but also the exterior that was finished with much more conventional tile roofs, which did not allow to place the great figures of angels whom Gaudí had anticipated and who at the moment are exposed in the garden of the palace.

The windows are of gothic style and those of two of the towers display bishop Grau coat of arms. The gable roof is in a Greek cross form, and made of slate.

Chapel frescos. Presentation of the Christ-child in the temple, other scenes of the life of Jesus, personages of the Old testament, Adam and Eve, the Nativity and other Biblical figures of Fernando Villodas.

Chapel stained-glass windows. Scenes of life of the Virgin Mary and Jesus, the creation of Adam and Eve and the expulsion of the paradise made by Joan H. Maumejean, a French artist who developed most of his artistic activity in Barcelona and who was based for this work on drawings of the painter Modesto Sanchez Cadenas.

Although instead of the decoration work became after the abandonment of Gaudí, it is considered probable that it was based on gaudínian criteria, because it had been make during the period – until 1913 – in which the bishop was Julian de Diego y Alcolea very identified with these criteria. 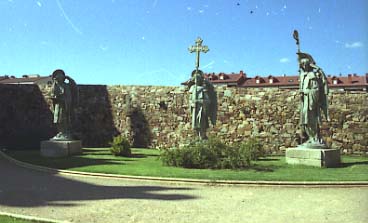 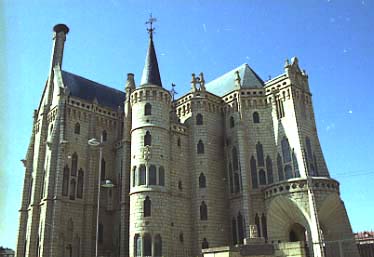 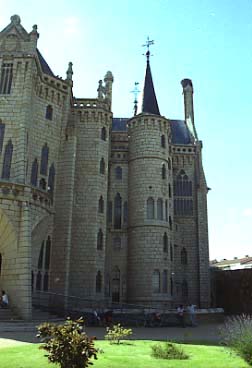 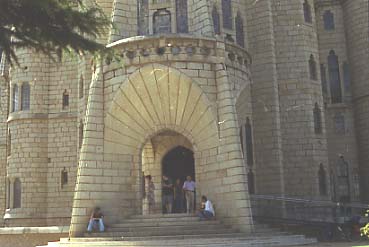 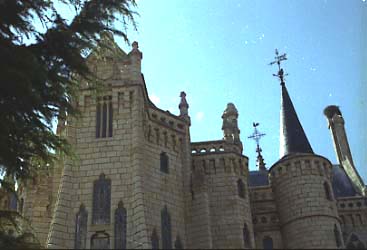 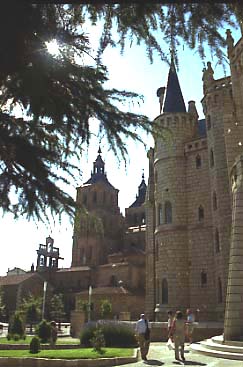 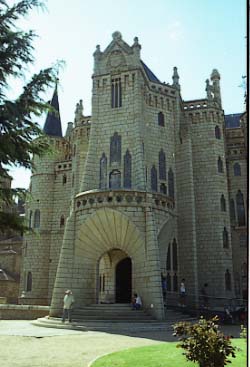 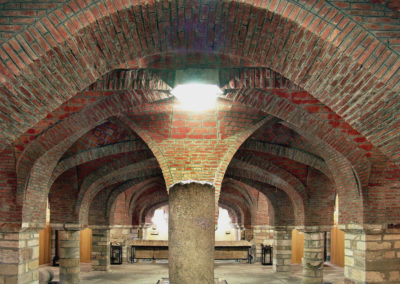 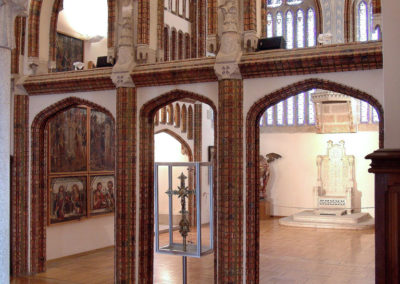 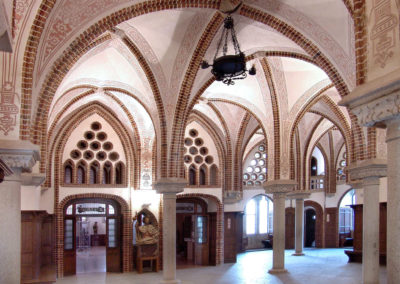