Beginnings:
As a painter, Riquer developed an important body of work consisting largely of oils and watercolors with natural and allegorical motifs, the most notable of which are his landscapes and religious themes. Among the latter, his San Julià Hospitalari, Annunciation, and St. Francis and the Birds are worth special mention.
Riquer displayed his oils and watercolors in several exhibitions, and in 1890 he organized his first solo exhibition, at the Sala Parés in Barcelona, where he showed 25 oils depicting various themes including realistic landscapes full of birds, flowers, forests, and other natural elements.

Influences and Pictorial Motifs:
The English Pre-Raphaelites exerted a profound influence on Riquer. During that era, his style evolved from an iconographic phase based on the themes mentioned above toward a more idealistic phase dominated by images of saints and the Virgin Mary and a general cult of feminine purity visible in his Entre Illiris (1890), Divina Pastora (1891), and Annunciation (1893). Upon his second marriage, at the age of 54 to the French writer Marguerite Laborde (Andrée Béarn), Riquer entered French artistic circles and regained his interest in the landscape, painting Pyrenean forests, some of which were exhibited in Pau in 1912.

Exhibitions:
Between 1912 and 1913, Riquer held three exhibitions in the Sala Parés and Sala Fayans Català, displaying landscapes of Andalusia, Mallorca, and Ibiza, where he had recently visited. In April 1915, he organized another, larger exhibition at the Fayans Català Exhibition Hall in Barcelona. This exhibition was divided into four sections: Spain – inspired by Goya and Romanticism -, Ibiza and Mallorca – landscapes -, Pyrenees – fresh, realistic landscapes of the French Pyrenees, and Miscellaneous – reflections on the world of literary and musical allusions-. This exhibition enjoyed great public and critical acclaim, but Riquer sought peace to reduce the tension he found himself suffering for a variety of reasons, among which was the triumph of the Noucentisme movement. For this reason, he returned to Mallorca and dedicated himself again to landscapes.
The changes brought by Noucentisme – which Riquer energetically criticized for its poverty of style – resulted in a sharp decline in commissions for Art Nouveau works (with the exception of bookplates), so much so that Riquer considered moving to Argentina.

The end of Art Nouveau:
Between 1906 and 1911, Noucentisme completely marginalized Art Nouveau. Eliseu Trenc has considered this stylistic evolution and contends that the severest decline was in the decorative arts; therefore Riquer concentrated on poetry and literature, with the usual pantheistic exaltation of nature.
His paintings from this period can be divided into three geographic categories:
1) Catalonia and Spain 1907-1912,
2) the Pyrenees 1912-1914, and
3) Mallorca and Ibiza, 1917 until Riquer’s death in 1920.
Although between 1908 and 1910, we find paintings of exoticized fauns, satyrs, and nymphs, Riquer’s preference for landscapes was clearly growing. The line disappears from his canvases, and his forms are created using a spatula or paintbrush.

In Mallorca:
Finally, in 1917 Riquer installed himself in Palma de Mallorca, where he organized exhibitions at the Círculo Mallorquin in April 1918 and May 1919, and at La Veda in January 1920; these exhibitions were especially enjoyed by the more conservative sectors of the islands.
In 1920, shortly before his death, Riquer still found time to display his Mallorcan landscapes at the Casino Sabadellenc in Sabadell, again at the Sala Parés in Barcelona, and also in Paris, at the Salon d’Automne. These late exhibitions give some idea of the vitality Riquer possessed until his final moments.
Death came to Alexandre de Riquer on Mallorca at the age of 64, on that island with the memory of his homeland, his childhood, and his youth which were his deepest passions.

(L to R)
The Temptations of Saint Anthony
The Annunciation 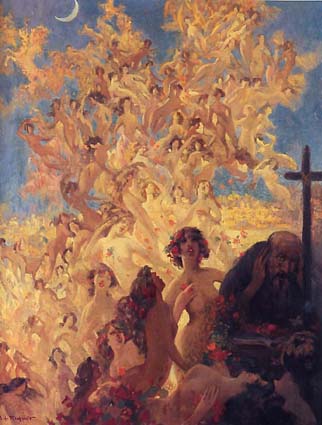 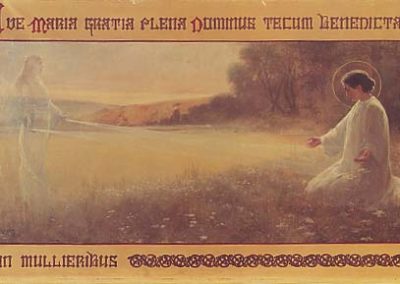 Row 4: Pantheism, Watteau party, Outing to Vallvidrera,  First Aid ca.1917 (an oil by Riquer known today only through a photo of a reproduction). 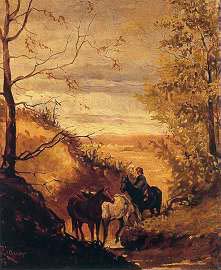 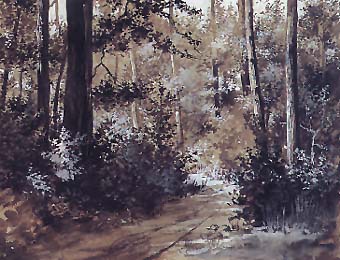 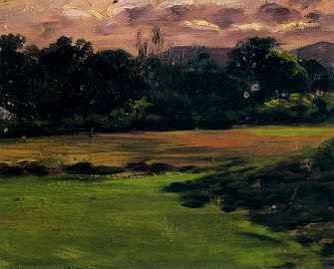 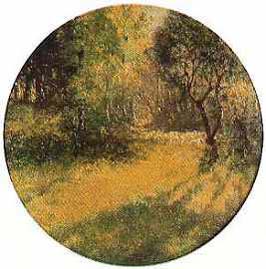 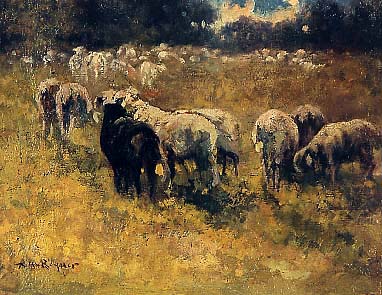 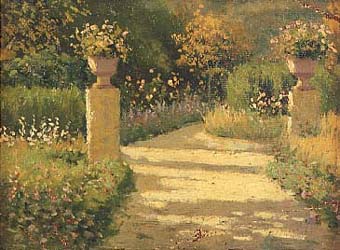 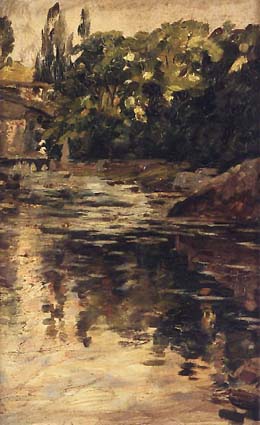 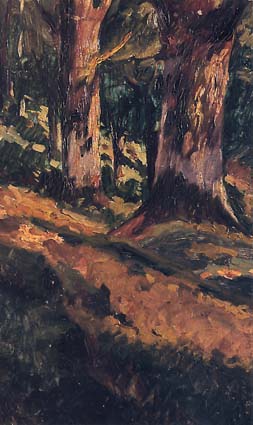 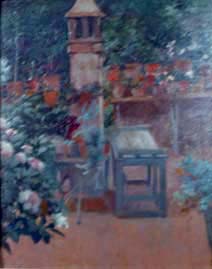 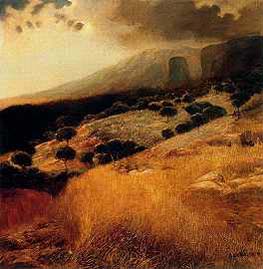 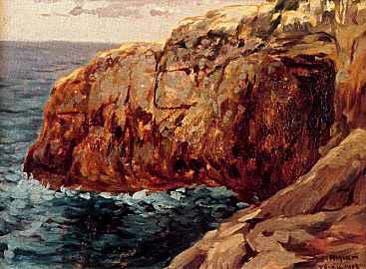 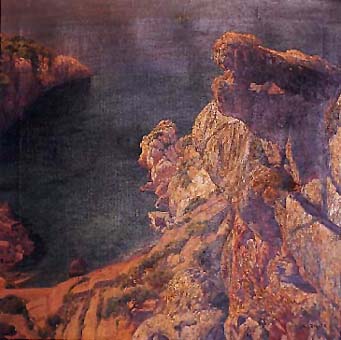 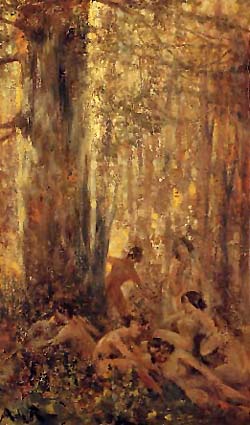 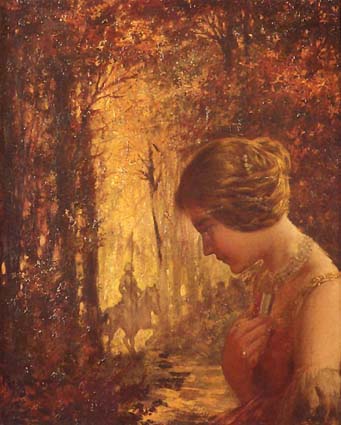 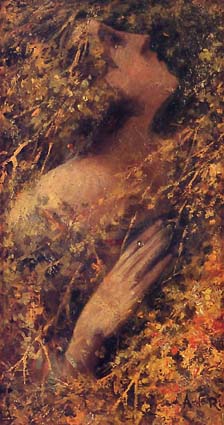 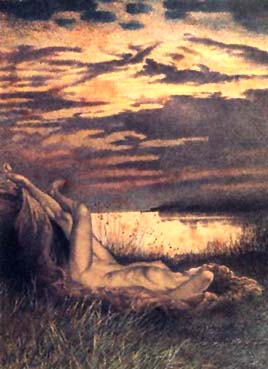 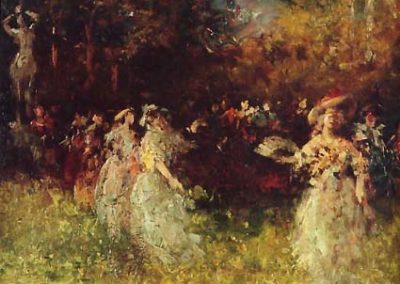 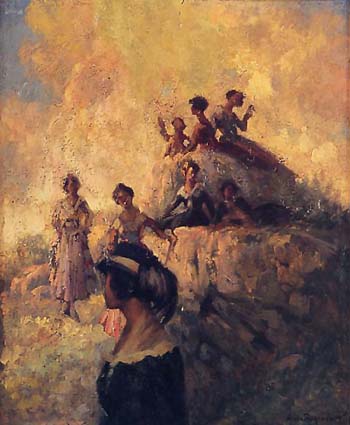 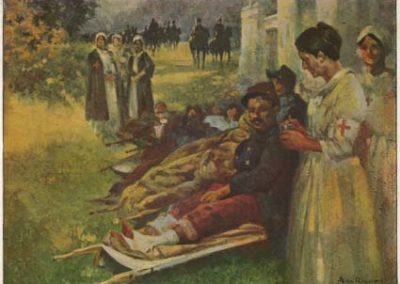 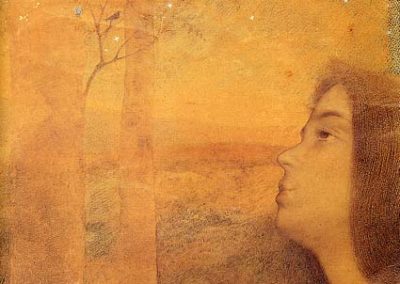 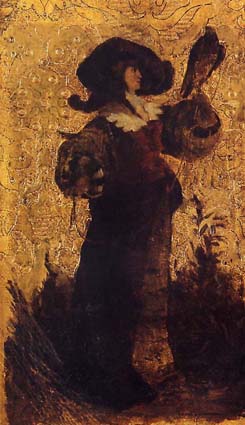