Beginnings:
Riquer’s first known foray into interior decoration is of considerable importance, since it was no more and no less than the decoration of the Hotel International built by Domènech i Montaner for the World’s Fair of 1888 held in Barcelona. This work was a miracle of the constructive capacity of its architect, and the interior decoration in which Riquer played an active role displayed luxury and good taste.
Unfortunately, the hotel was destroyed at the end of the World’s Fair because it had been built in only a provisional manner, despite the fact that very elaborate techniques went into its construction and that it had been built on land donated specifically for it. For this reason, few images of the hotel survive today.
Also during this period, at Gaudí’s request Riquer designed the monumental fireplace and chimney of the Palau Güell in Barcelona.

Apse panels in Montserrat:
From 1896 to 1897, Riquer decorated the vertical panels of the apse at the church of the monastery of Montserrat (the patron saint of Catalonia), which he had been commissioned for in 1894. Although he completed this work with the collaboration of other artists belonging to the Artistic Circle of Saint Luke, these years belong to a period in which Riquer’s work evolved differently from that of his colleagues and in which he immersed himself completely in the Art Nouveau aesthetic. According to Eliseu Trenc, these constituted Riquer’s most successful works.
Teresa Macià i Bigorra describes these paintings of Riquer in the following manner: the six large paintings in the apse are symmetrically arranged, three by three, on each side of the alcove, permitting sight of the image of the Mother of God from throughout the church.
The two side panels are twice as wide (12mx6m) as the four Art Nouveau panels that complete the apse (12mx3m). These four central panels are by Alexandre de Riquer. Riquer depicts on two of the large canvases a vegetable motif, in which the stylized nature from the same roots evolves and threads its way up to touch the sun, representing a dual symbol: the sun-cross. Among the branches and the winding leaves, Riquer has placed the coats of arms of Montserrat and of Catalonia, and of the Church and of the Benedictines, respectively. The background is of a uniform dark color. The composition is organized in an ascendant manner.
In the other two panels Riquer has placed two groups of winged female figures. These two vertical and ascendant compositions feature at least twenty full-length angels – representations of the ideal of female beauty typical of the age – and about fifteen smaller angels, showing only their heads and wings from a higher angle. The background is bluish. 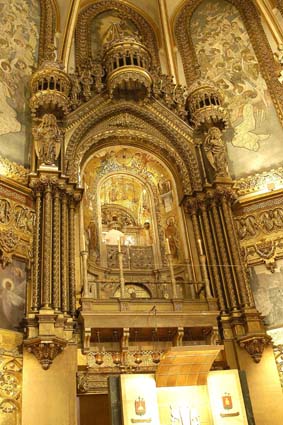 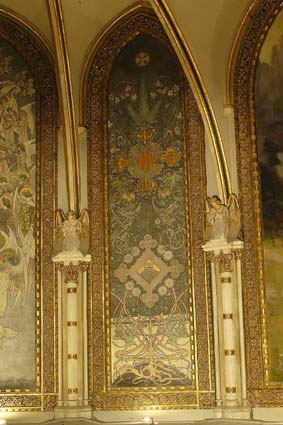 The presbytery at the Church of Montserrat **

Triumph of the Art Nouveau aesthetic:
In 1897, Riquer decorated the interior of the Alomar house, the most distinctive elements of which were six panels representing the four seasons and the two allegories of poetry and music (now part of a private collection).
In 1900, he completed the decoration of the pharmacy belonging to his relative, Grau Ynglada, on the Nou de la Rambla street in Barcelona, collaborating with Gaspar Homar on the marquetry and with Granell on the stained glasses.
One of the most spectacular creations of this period was Riquer’s design for the Circle of the Liceu (located in the same building as Barcelona’s opera house/theatre) in 1900. He created lamps combining wood, metal, and enamel that represent some of his most delicate work. They can still be seen in all their splendor in the same place for which Riquer designed them.
In his work for the Liceu, Riquer collaborated with artisans such as Gaspar Homar, who made the furnishings, and A. Rigalt for the glass work, as well as the industrial tile manufacturer Escofet and others.
In the same year, he completed the decoration of the Industrial Institute of Terrassa, and despite the fact that the female nudes in his paintings represented the textile industry and commerce, they were rejected by the chairman for being too daring. The commission was later completed by Joaquim Vancells. Riquer’s original paintings can today be seen at the Casa Museu Alegre de Sagrera in Terrassa (Vallès Occidental).
He also decorated the Café Català in collaboration with the Vives brothers, the Maison Dorée in 1903, and the Catalan Cattle Market in 1905. 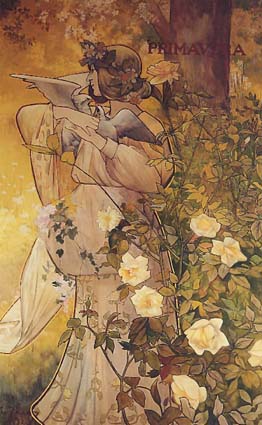 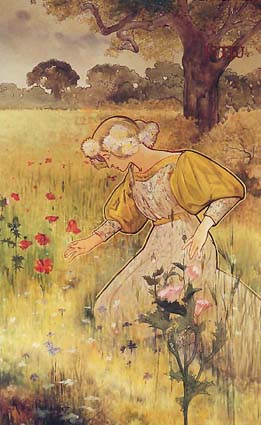 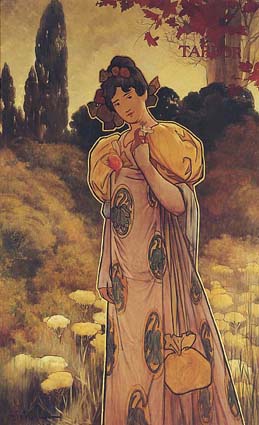 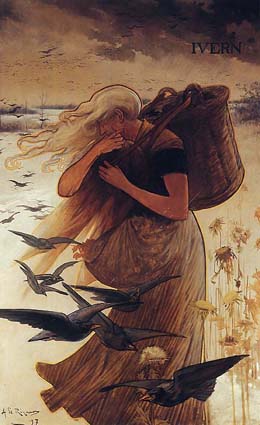 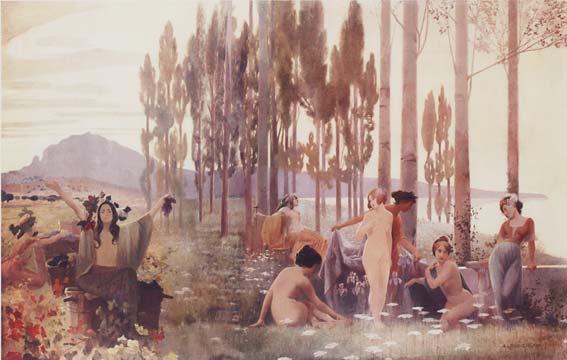 Marquetry, “Botany” and “Medicine” at the Grau Ynglada Pharmacy (no longer extant) 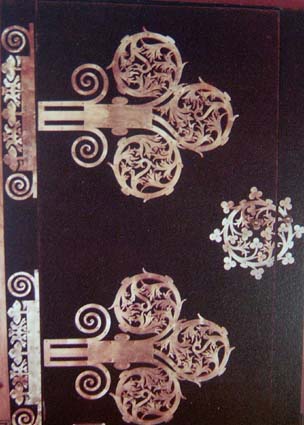 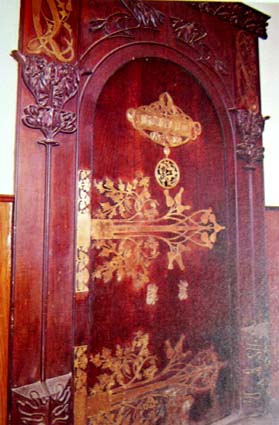 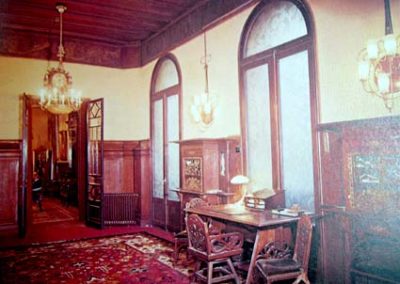 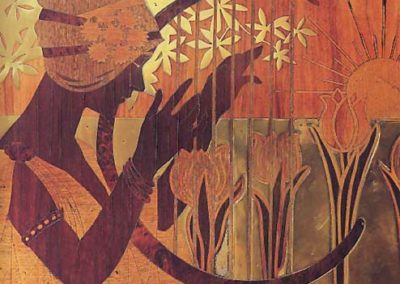 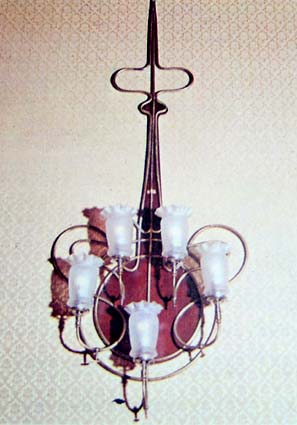 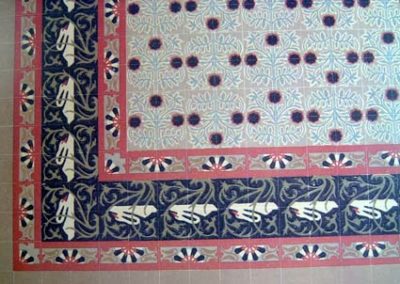 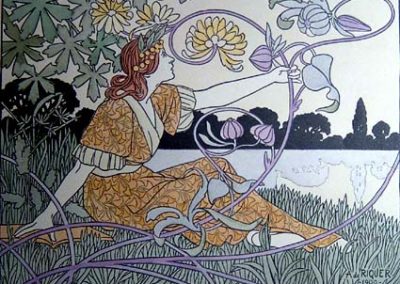 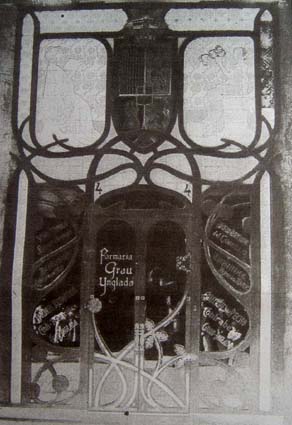 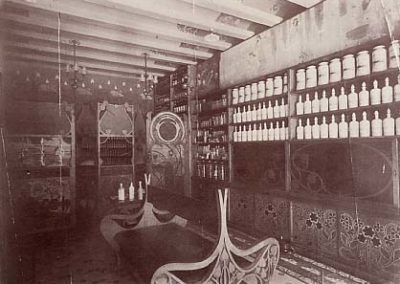 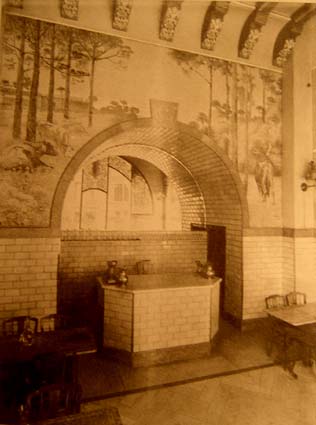 -Images published courtesy of the Monastery of Montserrat (**), the Museu Alegre de Sagrera ( *) and the Artistic Circle of Sant Lluc (*).