Out of Catalonia:
Monument to the king James the I
(València 1891)
Jorbalán Vicountess Mausoleum
(Adoratrius Church in València)

Born in Barcelona in 1833.
He studied together with its brother Venanci in the School of Llotja in Barcelona, as a disciple of the famous Catalonian sculptor Damiá Campeny.
He began his artistic career in collaboration with his brother, sculpting small nativity scene figures in the Baroque style in a shop in Tapinería Street, Barcelona. In 1872, they travelled to Manchester, England, where they executed portraits of Lord and Lady Stanley.
In 1881, he became a professor at the School of Llotja, where he had formerly been a student.
As with his brother Venanci’s work, his sculptures are very realistic in style and are noted for the great deal of care which he put into their detail. Much of his work was done in collaboration with his brother, and at times, it is difficult to attribute a work to one or another.
Agapit’s work is traditionally considered to be complementary to that of his brother Venanci, which is regarded as being the more spectacular; nevertheless, the work of Agapit is appreciated for the formal perfection that the most brilliant work of Venanci does not reach.
Although the Vallmitjana brothers should be considered as academic sculptors working in a realistic style, and therefore predating modernism (Catalan Art Nouveau), because the majority of their work was carried out before of this style emerged, the fact that both were teachers of famous modernist sculptors, such as Llimona, Gargallo and others, gives them a special importance as precursors of the style.
Agapit Barbany died in Barcelona in 1905.

(L to R)
The Commerce – The Industry – The Lions Hunter 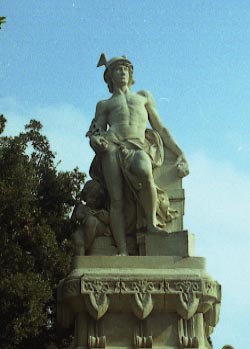 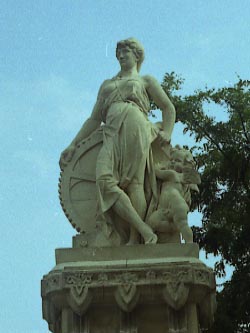 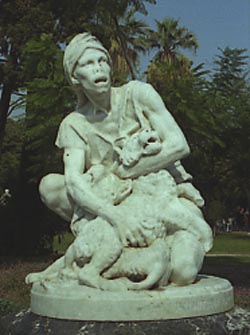