The Colònia Güell crypt, served to Gaudí by experiencing with the most adequate support techniques to bear large efforts. In this crypt the master lines applied later by Gaudí to the Sagrada Família are already present.
Centering us already in the Sagrada Família central nave, and looking at from top to bottom – since the exterior roof to the columns leaned on the temple plant -, we will see that the succession in the transmission of weights is done by an interiors inclined columns system, that further down bear the weight of the temple vaults and are unite in pairs near the top of the central nave. Further down, an inclined column collects the weight of the upper large windows and the support effort of four columns of the central nave is reunited in a solid unique column when arrived at the floor. This produces in the observer an effect of a forest of an exceptional architectural beauty.
The columns are slightly inclined toward the interior in the central nave. The columns splitting the lateral naves, that is to say, the ones that bear to a first level the choirs are also inclined but in contrary sense.
The nave columns are striated and are slightly conical. The capitals from which the columns fork, have ellipsoidal forms and are decorated with symbols.
The dome columns, those of a greater diameter have twelve sides. 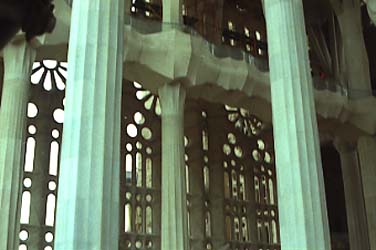 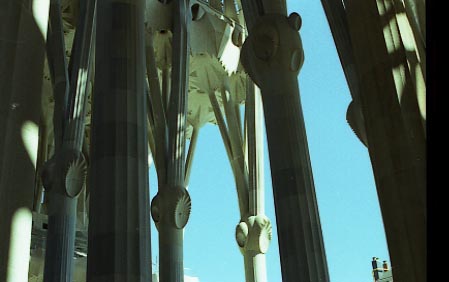 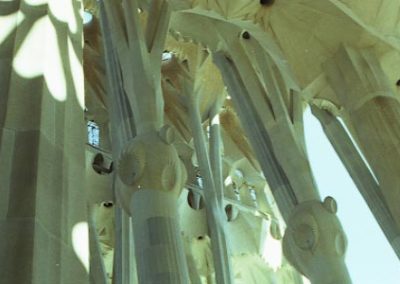 The nave vaults are formed by prefabricated modular and light hyperbolic domes simplifying very much the construction, allowing also notable decorative combinations, highlighting the forest effect we referred above when speaking about columns.
The variety allowed by concave and convex hyperboloid systems do an effect of star shaped surface allowing to include dispersed points of light.
As for the domes, raising to a height of twenty meters above the central nave, Gaudí left partial studies following also hyperboloid shapes. 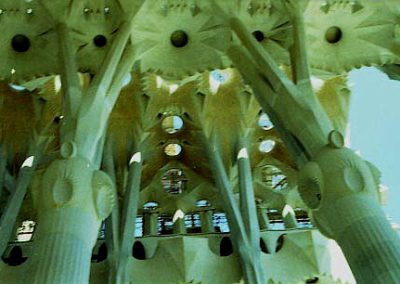 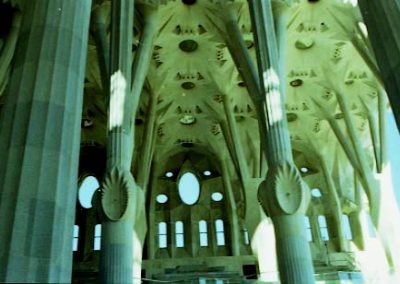 The drawing that Gaudí did of the large windows was evolving from the initial neo gothic to the ellipsoidal drawings with various alternatives.
This drawings can be observed in many of the parts of the building. In the cloister it is possible to see pointed windows and trilobulated pediments, in the exterior walls neo gothic large windows, rose windows, ellipses, rounds, longitudinal windows, etc. in the transept enormous rose windows with spectacular colours with delicate intensity shades, in the apse, in the Glory façade and also some of not started ones in the base of the main dome, that will be of great size. 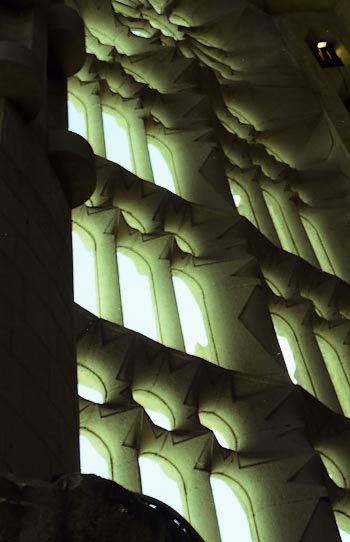 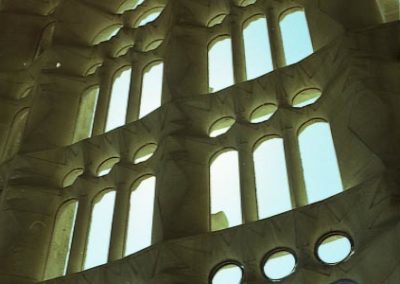 The Sagrada Família exterior walls only have to bear their own weight, because the vaults weight and push are transmitted to the floor through the interior columns.
In addition, the walls are completely perforated by rose windows, ogives, large windows and other openings lightening very much the weight.
Here also the hyperboloids are the most used form allowing Gaudí to adopt the better technical and aesthetical solutions.
The walls basement has a height of four meters over which begins the first series of large windows with a height of twenty meters. Above these, a second series of large windows with a height of ten meters, raise to the central nave vaults. The pediments of these windows are crowned by Eucharistic symbols.
The sculptor Etsuro Sotoo has carried out the musician and the singing angels sculptures as well as the decoration of the pediments culminations of these walls. 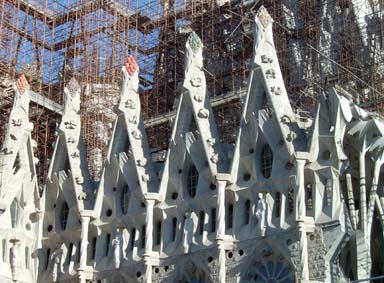 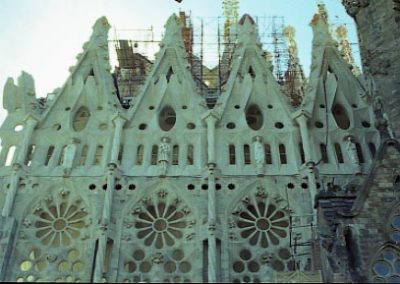 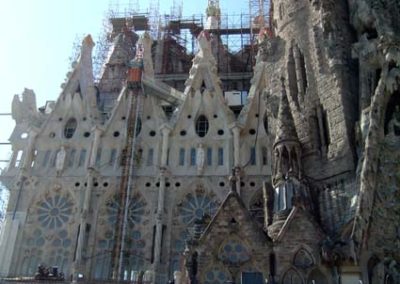 The higher ones are those of the central nave, they are comprised of a series of pyramids – one by vault – connected between them and with the large windows pediments with some large paraboloids. They are culminated by lampposts with references to the Holy Family.
Between the roof and the vaults, it is an space of some 25 meters divided into four plants connected by a small spiral staircases.
The lighting, really spectacular, is carried out through skylights on the mentioned pyramids and in the spaces between the large windows and the pediments.
The lateral naves roofs are almost flat, to allow larger windows in the central nave upper walls.
Small interior stairs and exterior steps assure the accessibility. 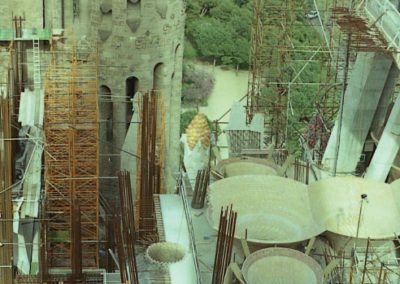